Top 5 Most Poisonous Snakes in the World

There are countless species of reptiles across the world and all of them are known for their varying qualities and characteristics. The same holds true for snakes. Now, when it comes to snakes, here is a bit of information about the top 5 most poisonous snakes in the world: 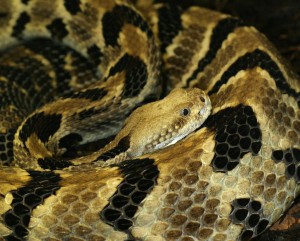 Vipers are found in a majority of countries all across the world. Amongst them all, the most poisonous of this kind are the Chain Viper and the Saw Scaled Viper, which are found in India, China, South East Asia and Middle East. The thing with vipers is that they are very short-tempered. The first symptom that you would suffer from when it bites you are inclusive of excruciating pain, bleeding- particularly from the gums, low blood pressure and falling heart rates. At the site of the bite, you may also notice blistering, necrosis facial swelling and vomiting etc. It is also possible for death to occur anywhere between 1 to 14 days post-bite due to respiratory, septicaemia or cardiac arrest.

Found commonly in Australia, the amount of poison or venom that is found in a Taipan snake is so much that it can easily kill nearly 12, 000 guinea pigs at a time! What the poison basically does is that it forms clots in the blood of the victim, and blocks out arteries and veins. The worst part is that the venom is extremely neurotoxic. Believe it or not, but before an anti-venom was introduced, it just wasn’t possible for anyone to survive after having bitten by a Taipan. Even if the anti-venom is administered, the victims get to have an extensive stay in the hospital under intensive care. In terms of its behaviour, morphology and ecology, it has largely been associate with the African Black Mamba. 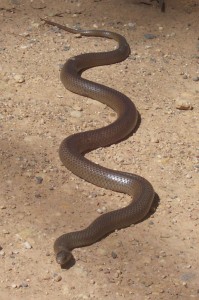 Think this snake has a beautiful name? Well, don’t get fooled! Only about 1/14,000 of an ounce of the venom that it contains is so much that it can kill an adult human right away. The worst part about this snake is that it prefers living in the major population areas of Australia. It moves really fast, is extremely aggressive, and can repeatedly strike at its aggressors. Even the young ones have enough venom to kill a human. In its venom, the snake contains blood coagulants and neurotoxins. However, the one thing that you should remember is that they react only to movements. So if you ever encounter one, just stand very still.

This particular snake specie is found commonly all through the continent of Africa. These are extremely aggressive snakes and have precision that can be considered deadly. The worst part is that they are also the fastest land snakes in the world and can move at a speed of about 20 km/h easily. 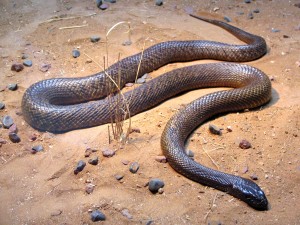 This is a sub-species of the Taipan snake, and is known to be the most toxic snake in the entire world. The yield record that it holds for one bite is said to be around 110mg – that’s enough to kill 100 human at a time!